Tonight, I was looking at the Utah Democratic Party's web site, and something troubled me: 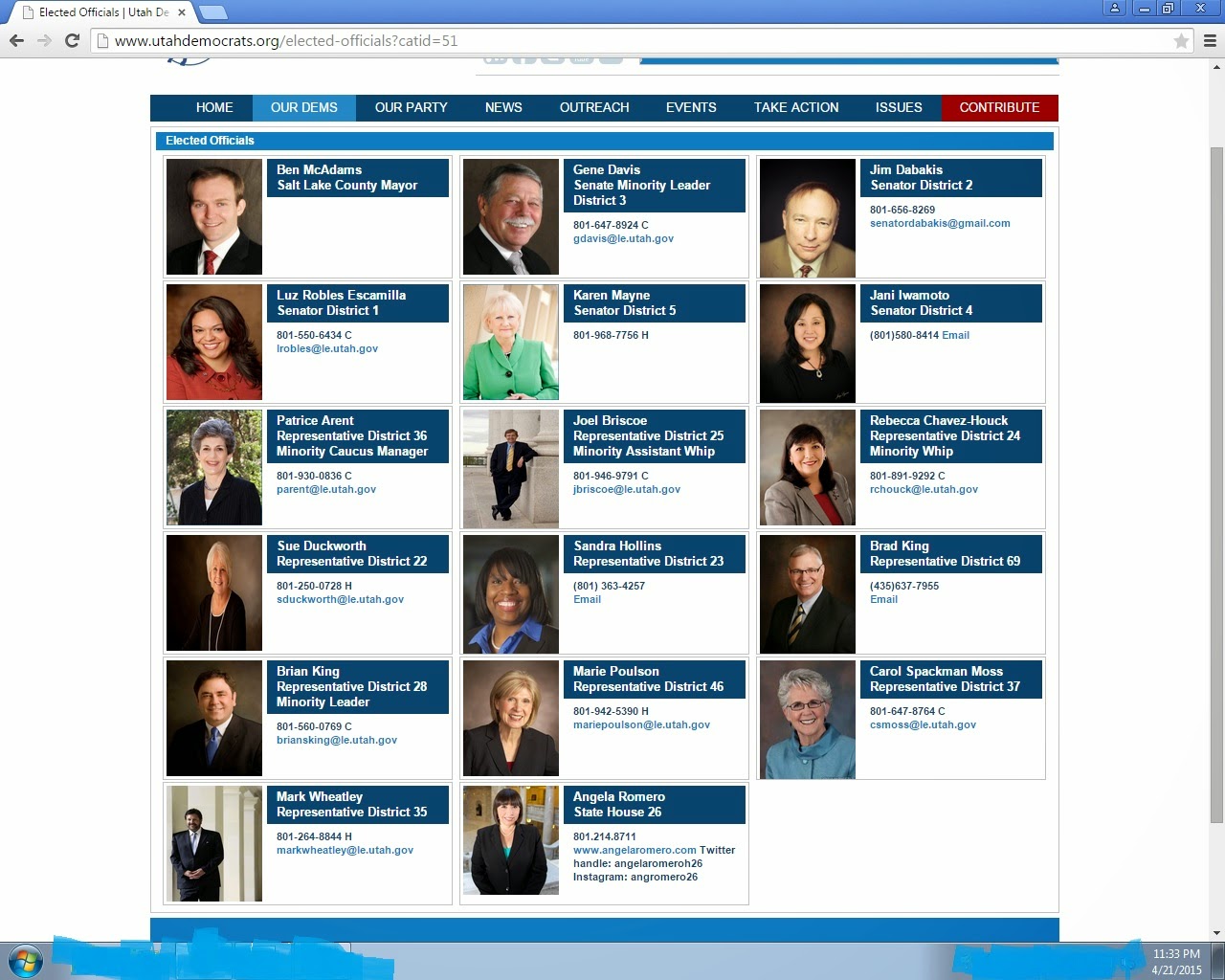 Which could only mean three things:

1) Representative Miller was abducted by aliens and therefore is no longer representing the good people of Millcreek (my parents will miss having you as their Representative).

2) Representative Miller was kicked out of the Utah Democratic Party for unknown reasons.  Maybe he failed a James Evans-esque litmus test.

3) The Utah Democratic Party went partway updating their web site after the most recent election.  Which we all know could never be the case.  This is the group talking about using the internet to run their Presidential Primary next year.  Couldn't be that. 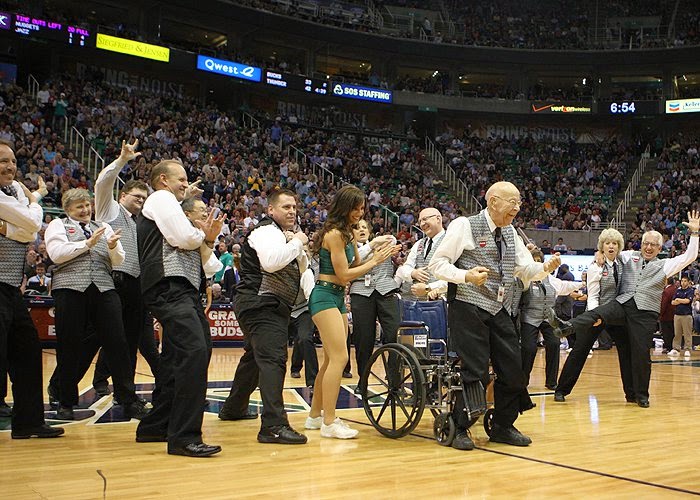 I saw on the news tonight that longtime EnergySolutions Arena/Delta Center/Salt Palace usher Wally Price has died. Wally was a coworker. And a friend.
Wally worked at the "back" entrance, where the players and VIP's came and left.  Legend has it that when Larry H Miller designed his arena, he asked Wally where he wanted to work and built the rest of the arena around it. When Larry died, Wally spent 3 hours in line at the viewing, despite the fact that several people, including at least one Miller family member, told him that he didn't have to wait, he could go to the front of the line.  Wally refused, because he was "regular people," and regular people waited in line.
That was Wally.  He was regular people.  If the ushers had to pick up folding chairs after the game, Wally was right there helping, until our boss told Security to escort him away. This happened multiple times, but Wally wasn't going to let being in his 90s be an excuse for not doing something.
Wally was excited when he discovered that I was a fellow Mormon Democrat.  After he discovered this, he always would find something to say to me about the Republicans, the Tea Party, the Legislature, or President Obama.  Sometimes he'd just greet me with "How's my favorite Democrat?"
One of Wally's favorite things to say when people told him it was good to see him was "It's better to be seen than to be viewed."  I asked him what it meant, and his reply was that if you're being seen, you are breathing and have a pulse, but if you're being viewed, it means that you're lying in a box in the Relief Society Room.
The last time I sat down and spoke with Wally, it was a Jazz game about six weeks ago.  I asked him how he was doing.  He said that he had a few things wrong with him, but that was expected of a man his age.  I told him that a man half his age would be doing good with only a few things wrong with him.  He told me that he probably wouldn't be alive much longer, but if he's still around when I ran for office, that I needed to call him so that he could be my first endorsement.  I told him that I've heard the "I'm dying" talk for him for the past decade, and that I had given up believing him, and that he would be one of the first people I'd contact if I ever ran for office.
Godspeed Wally Price.  Until we meet again, my friend.
From Your Friend Bob at 01:06 2 comments:

Email ThisBlogThis!Share to TwitterShare to FacebookShare to Pinterest
tags: In Memory of, Utah Jazz

KSL did a story on the final election results in Davis County.  You can read the story here, if you want to.  But, there is a major issue with something stated in the story.  Oh, and Davis County gets excited about low numbers.


"We think that the voters this election were more informed and more engaged than they have ever been in any other election," Brian McKenzie, Davis County election manager, said Tuesday.

The nearly 48 percent voter turnout fell below that in the last off-year election, but McKenzie still calls it a success.


How exciting!  Less than half of the people registered to vote in Davis County turned out!  They cranked it up to 5!

But, here comes the part that needs fact checking:

Why, then, do the official numbers from Davis County show the number to be significantly less?  Like, say 17,984?

Because KSL doesn't know how to read the results.  See, 77% of the Davis County voters who chose to vote straight party voted Republican.  It was actually 27.5%.

Real news outlets would have people who understand these things report on election results.
From Your Friend Bob at 01:43 2 comments:

So, here we are.  It's another Election Day.  It's the midterm election, which is kinda like Halloween: That thing that people overlook, but you really need to have happen before you can get into the Holiday Season.  I mean the REAL elections.

With that, here are my totally made up, probably BS election predictions for 2014.

The big race locally features Doug Owens versus Mia Love to replace Jim Matheson, who retired this year to work on his 2016 Senate 2016 Gubernatorial spending more time with his family, which is also what he does during the National Democratic Conventions.  In 2012, I said Mia Love would win by 2 points, and she lost by less than 750 votes.  This year, you're going to have to read this entire post to see my prediction.

The Republicans will control the Senate with 52 seats.

The Utah Democratic Party will lose on seat in the Utah House, and will come up with a net gain of zero in the Senate (Win in district 12, lose in district 4).  The Democrats will declare victory in their own "mission accomplished" moment, sans codpiece.

All three amendments will pass, ZAP will be renewed, and Sean Reyes will still be the Attorney General for Hire.  The only surprise will be the third party candidates in the AG race getting 10% of the vote.

Oh, and by 750 votes, we will get to see what the 2015 version of Representative Love will be like.

In this TV ad, Mia Love claims that the rumors about her education plan are false.

You know the plan.  The one that would get rid on the Department of Education?  Well, that was her plan in 2012, even though she claims it wasn't ever her plan (which means she's either lying in 2012 or 2014).

However, she is allowed to change her plan.  This plan issues the "truth" about her plan, but doesn't actually present anything about her plan (other than saying the rumors are false).It does, present some problems that would very easily be fixed by eliminating the Department of Education.

Mia Love has no plan, other than not the plan she had in 2012, because that was never the plan.

Mia Love's current education plan includes bringing the Department of Education's salaries in line with Utah teacher's salaries.  It said so on a TV ad I saw tonight.  It says so on her web site.  She even said so to the Salt Lake Tribune, as captured in this video:

However, a dollar in Utah gets you further than a dollar in Washing DC, where those DoEd workers live.  According to this Cost of Living Calculator for CNN Money, Someone making $50,000 in Salt Lake City Would have to make $73,578 to have the same level of living in Washington DC.

And, I won't even touch worrying about education requirements or anything else at this point.  Nor will I talk about the logistics of cutting someone's salary by half or even a quarter.

However, if Mayor Love wants to look at some expensive salaries, one need look no further than right here in Utah  (all of these salaries include benefits):

The State Superintendent for public schools is costing the state of Utah $250,000 (or over 2 DoEd employees or 5 Utah teachers) (source)

And, let's remember that, should she win next week, Mayor Love's salary will be $174,000.  Significantly higher than that of a typical DoEd staffer.  And over 3 times the salary of a Utah teacher.

Maybe we should bring Congressional salaries in line with Utah teacher's salaries.
From Your Friend Bob at 00:39 No comments:

Even a great reporter can have a story get off course when misinformed by those they interview.  Especially when those they interview are supposedly experts in their field.  Even Robert Gehrke at the Salt Lake Tribune is not immune.  I don't blame him, since the expert he interviewed is Mark Thomas, the state director of elections.

He should know the law.  But he totally missed on this one.

The story goes like this:  Back in June, it appeared on election night that Jim Dyer beat incumbent Jim Withers by one vote in the GOP primary for the Millard County Commission.  However, when the day of the final canvas came, there were several absentee ballots that had been misplaced, and the final tally had Withers up by 5 votes.  Mr Dyer challenged seven ballots, but the county commission, acting as the board of canvassers, rejected the arguments and accepted the results.

Dyer sued in court, and Fourth District Judge Claudia Laycock found enough evidence of illegal votes to cast doubt on the outcome of the election.  Because she could not determine who received the highest number of votes, she threw out the outcome of the election and ordered the county clerk to hold a new primary election.  However, there is some doubt about whether one could be held in time, and I agree.  However, where things move on from here is murky.  Here's what Mr Thomas at the state elections office had to say:

The way I read the statute is it says the office becomes vacant. So we’re still trying to read the opinion and provide some guidance to the county."

Thomas said it appears the law would call for someone to be appointed to fill the vacancy. That appointed commissioner would serve until the next election in 2016.


However, that's not entirely true. The office does not become vacant, because the ruling only affects the 2014 election, not when Withers was elected. The office is still held by Withers until January 1, 2015, when it will be filled by the winner of November's general election.  Since there is no longer a Republican Nominee (since the Republican primary was voided), and no other candidate filed to ruin, there are currently no candidates on the ballot.  However, there is a way to win without having your name on the ballot: a write-in candidacy.  potential write-in candidates have until September 5th to register.

If I were a party's chairman, I would be doing some heavy candidate recruitment right about now.
From Your Friend Bob at 01:16 5 comments:

All posts on here reflect only my personal opinions. They do not represent the opinions of my clients, my employers or their affiliates. All comments and pages contained in their links are the responsibility of their authors and do not reflect the position of me.